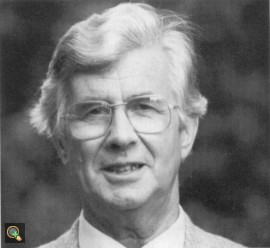 
RIP Peter Godfrey (1922-2017). Regarded as the godfather of choral music in New Zealand, Prof. Peter Godfrey passed away last night, but his legacy to choral music in NZ will live on. Principal Conductor (1979-1982) and then Musical Director (1983-1988) of the New Zealand Youth Choir, Peter established the musical foundations for our national choirs today. We will be eternally grateful …

I met Prof in May 1985 during my first NZYC course in Christchurch, and he made an instant impression. He demanded the highest musical standards, but was still enamoured by the lighthearted moments in rehearsal, such as when Martin Snell put up his hand and asked if he could tell a joke. At the end of the course the singers were asked if they would like to stay behind for a choral conducting workshop, and I took advantage of this opportunity to have my first conducting lesson. When I got up to have a go, Prof described me as his “little meat chopper” because of the violent way I was beating time. However, he was encouraging and supportive, and really helped to set me on the path to conducting when I left school.

Whenever I met Prof over the ensuing years he was always keen to chat about how the choirs were going. Even when his mind was not as sharp as it had once been, he was still able to conduct some of his old favourites from memory, such as Finzi’s ‘My Spirit Sang All Day’ and the old NZYC standards ‘Kyrie’ and ‘Heilig’ by Mendelssohn.

Prof was integral to the development of our world-class New Zealand choral scene. He helped to foster the careers of many young conductors and singers, and was a champion of New Zealand composers. Those of us who had the privilege of working with him will treasure our memories of his musicianship, leadership and humanity. Arohanui, Prof.