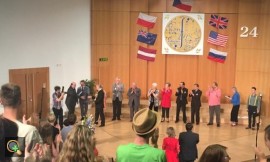 The New Zealand Youth Choir (NZYC) won the hearts of audiences and the judges at the 24th annual International Festival of Academic Choirs in Pardubice, Czech Republic


The New Zealand Youth Choir (NZYC) won the hearts of audiences and the judges when achieving a clean sweep, winning all four categories they competed in, at the 24th annual International Festival of Academic Choirs in Pardubice, Czech Republic over the last four days. Then, this morning NZ time, they crowned their outstanding performance by winning the overall grand prize – the Grand Prix.

“The choir worked incredibly hard and had developed a culture of doing the job at the time,” says Music Director David Squire. “The highlight was when the choir delivered the most intense performance yet of Waerenga-a-Hika which had audiences and judges in tears.”

“They sang with meaning and heart, which blew the judges away. We knew we were delivering something really special from New Zealand and its culture to European audiences.”

The NZYC competed against 15 European choirs from Russia, Poland, Latvia, and Czech Republic.

The choir will now continue its international tour to Le Quesnoy, a small town in northern France, which was liberated by the NZ Division just four days before the end of WW1, to participate in their memorial services.

From there NZYC will travel to Paris to participate in High Mass at Notre-Dame Cathedral singing an all-Kiwi programme and then to the UK to perform in Oxford, Windsor Castle and the prestigious St John’s Smith Square concert hall in Westminster.

(Watch NZYC performing a concert in the Czech Republic this week)