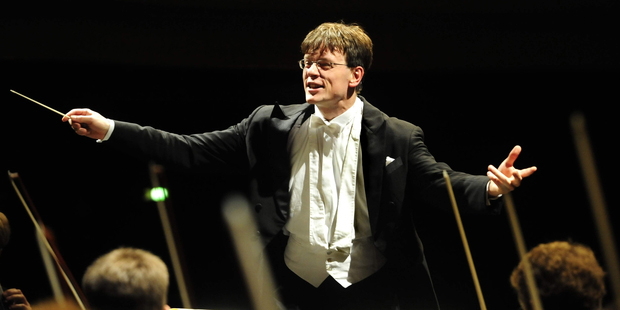 In festival’s homegrown highlight, orchestra and voices give rich offering of oratorio’s message of peace.


German conductor Eckehard Stier guided the APO and two choirs through the expressive textures of Michael Tippett’s A Child of Our Time .

With inspired singing from Voices New Zealand Chamber Choir and the New Zealand Youth Choir, Stier presented Tippett’s testament of hope. Auckland Philharmonia Orchestra’s presentation of Michael Tippett’s A Child of Our Time was the homegrown highlight of our 2015 Auckland Arts Festival.

The full orchestra then dispensed Messiaen’s Hymne au Saint-Sacrement, a vivid compendium of the Frenchman’s compositional ploys. Conductor Eckehard Stier effortlessly moved from dreamscapes to marches, with their brilliant splashes of saturated colour.

Tippett’s 1944 oratorio is made of sterner stuff. For the composer it was a Passion in the Bach mould , “not of a god-man, but of man whose god has left the light of the heavens for the dark of the collective unconscious”.

One of the great humanistic statements of its century, its plea for peace and tolerance is even more potent today, in a world plagued by violence and genocide.

The young choristers were admirably lithe in flying contrapuntal flurries, and richly expressive in the punctuating spirituals. One felt the intended anger of Go Down, Moses, even through an exquisite pianissimo.

The orchestra clearly enjoyed the combat of gnarly textures, some with those rhythms Aaron Copland playfully claimed as American. Details entranced, too, as when two intertwining flutes introduced the Interludum.

A quartet of fine soloists was dominated by charismatic soprano Indra Thomas and tenor Nicky Spence. Thomas was a force of nature, holding her score out of sight for one thrilling phrase and adding the glow of exhilaration to spirituals.

Spence similarly engaged us, poignantly relating the frustration of being between hammer and anvil over subtle Latin-tinged rhythms.

Victoria Simmonds’ sense of style ensured phrasing of distinction in lines that did not always escape the orchestral surround.

Derek Welton brought a relaxed gravitas as the Narrator but was slightly wanting in dramatic focus towards the end.

These are minor quibbles, however, and if you missed this inspirational concert live, do tune in to Radio New Zealand Concert tonight to hear it.

What: A Child of Our Time
Where and when: Auckland Town Hall, Saturday