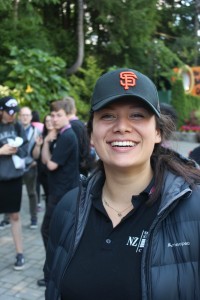 Te Ohorere Williams has joined NZYC after singing with the NZ Secondary Students Choir in 2015-2016, while also being a Cultural Leader during the cycle.

Te Ohorere was heavily involved in music during High School, performing with Choralation Choir under Rowan Johnston, and Cantare Choir under Fiona Wilson. She now enjoys singing under Dr. Karen Grylls in the Auckland Chamber Choir and the Voices NZ Pool.