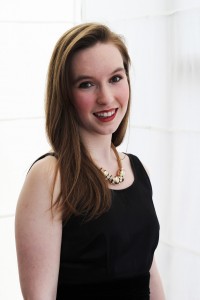 Born and raised in Wellington, Rebecca’s musical education began when she learned to play the cornet as a child in The Salvation Army brass band. She went on to discover a love for singing while attending Wellington East Girls’ College, and this led her to study classical voice performance at the New Zealand School of Music under Lisa Harper-Brown. Rebecca graduated with a BMus in 2014 and in this same year, was a finalist in the Dame Malvina Major Foundation Aria Competition in Wellington and competed at the National Young Performer Awards, following a nomination by the NZ Aria Trust.

Choosing a change in career, Rebecca now works in Public Relations at The Salvation Army’s Territorial Headquarters, as the Personal Assistant to the PR Director and Projects Officer. She continues to sing in her spare time, currently singing with the Tudor Consort after finishing five years with the Orpheus Choir of Wellington. Rebecca joined the New Zealand Youth Choir in 2015, and has returned for the 2017-2019 cycle.